Written by Selly
Updated over a week ago

To create a new campaign visit the campaign overview and click on the draft tab. You will find a button in the upper right corner that opens a new campaign form. 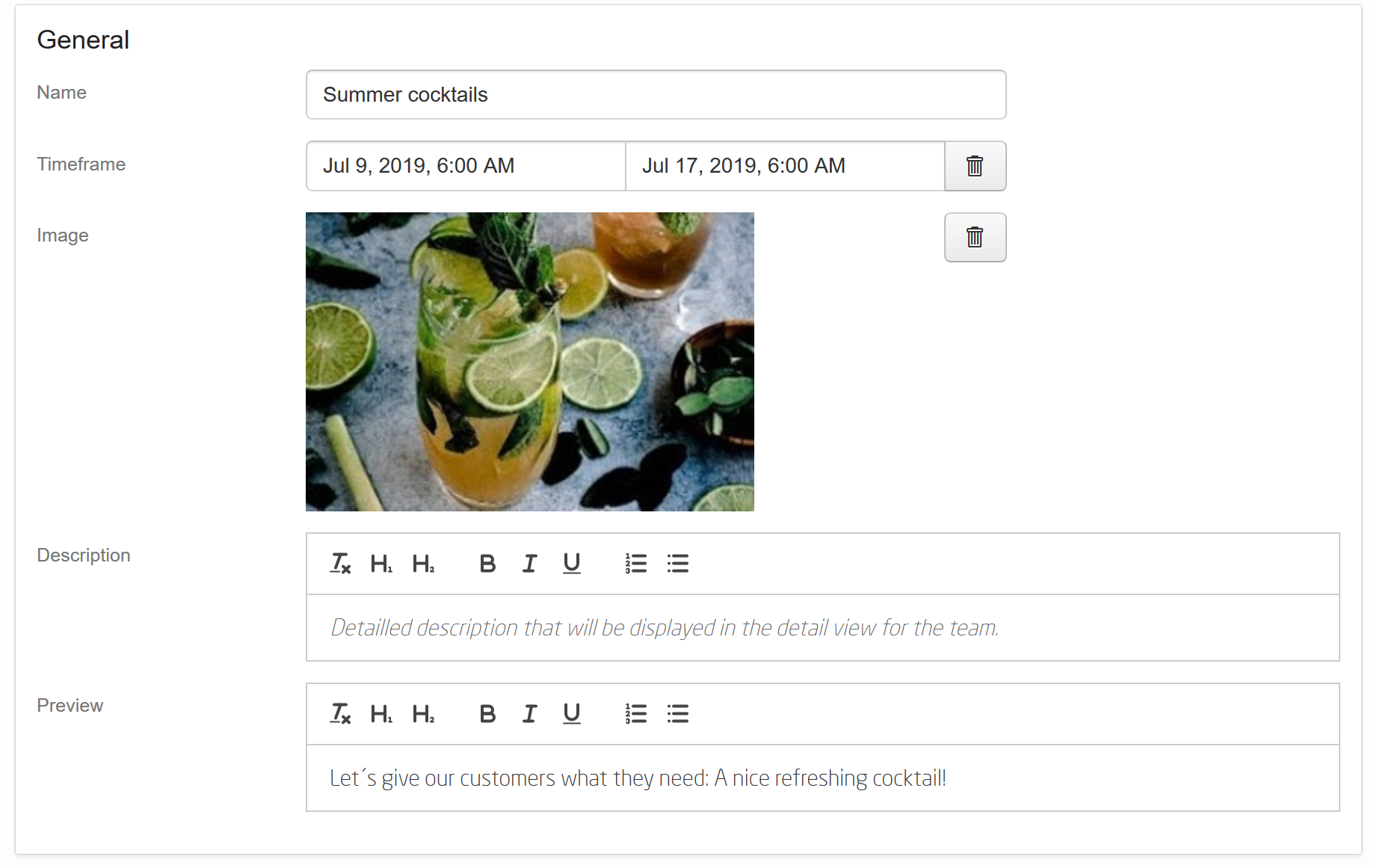 Here you define the period of the campaign, just click in the fields and select the start date and time.

You can upload an image for illustration, which is later visible to the employees.

The campaign description will be visible to staff during the ongoing campaign and should clearly communicate the campaign's goal and provide assistance to sales staff when needed.

In the second section you will find the configuration for your campaign. There are three choices you have to make: 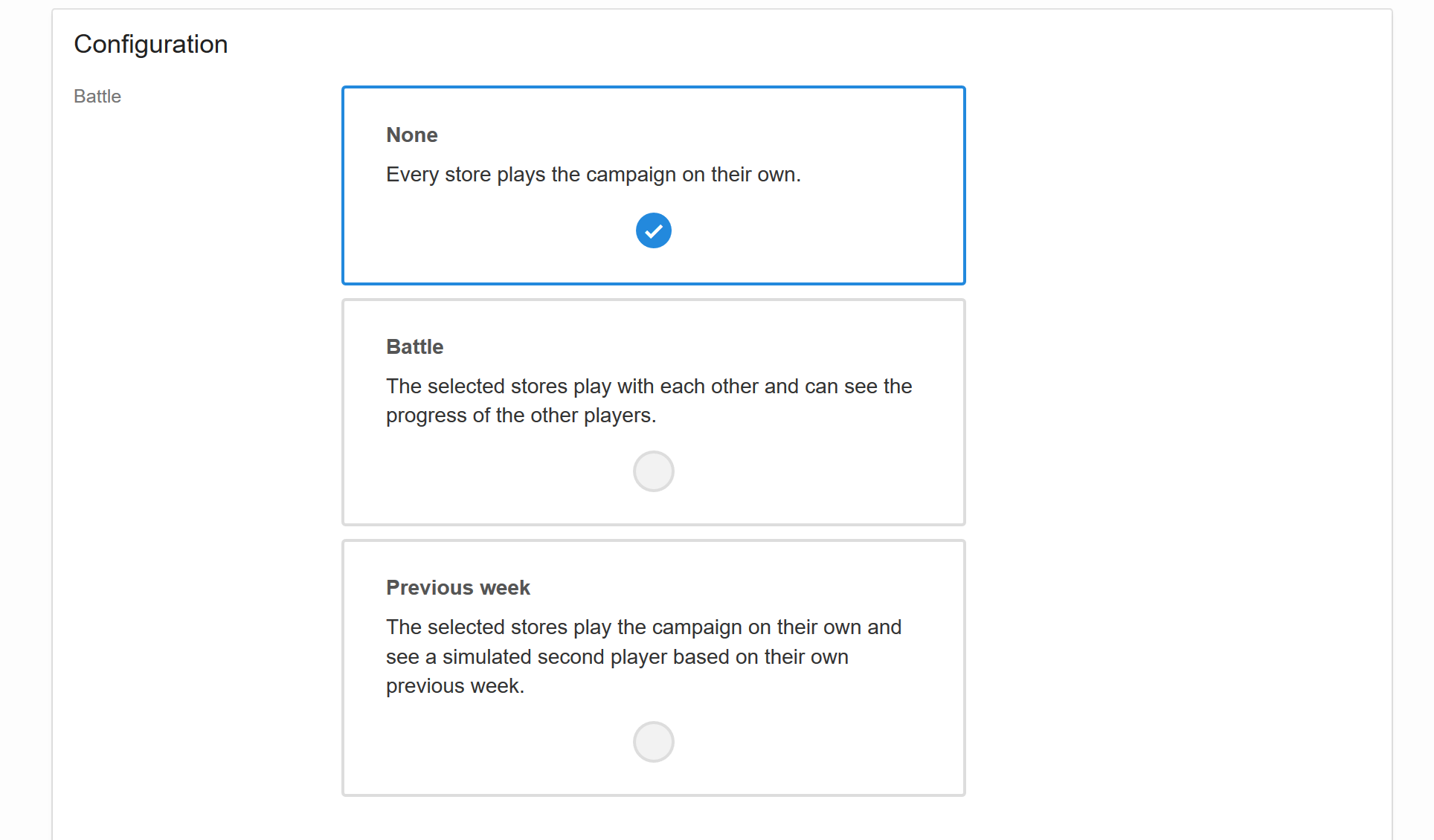 The first decision concerns the battle ie the competition mode. Here you can choose between Without (no competition), opponents (fighting against other stores) or last week (competition against your own performance from the previous week). 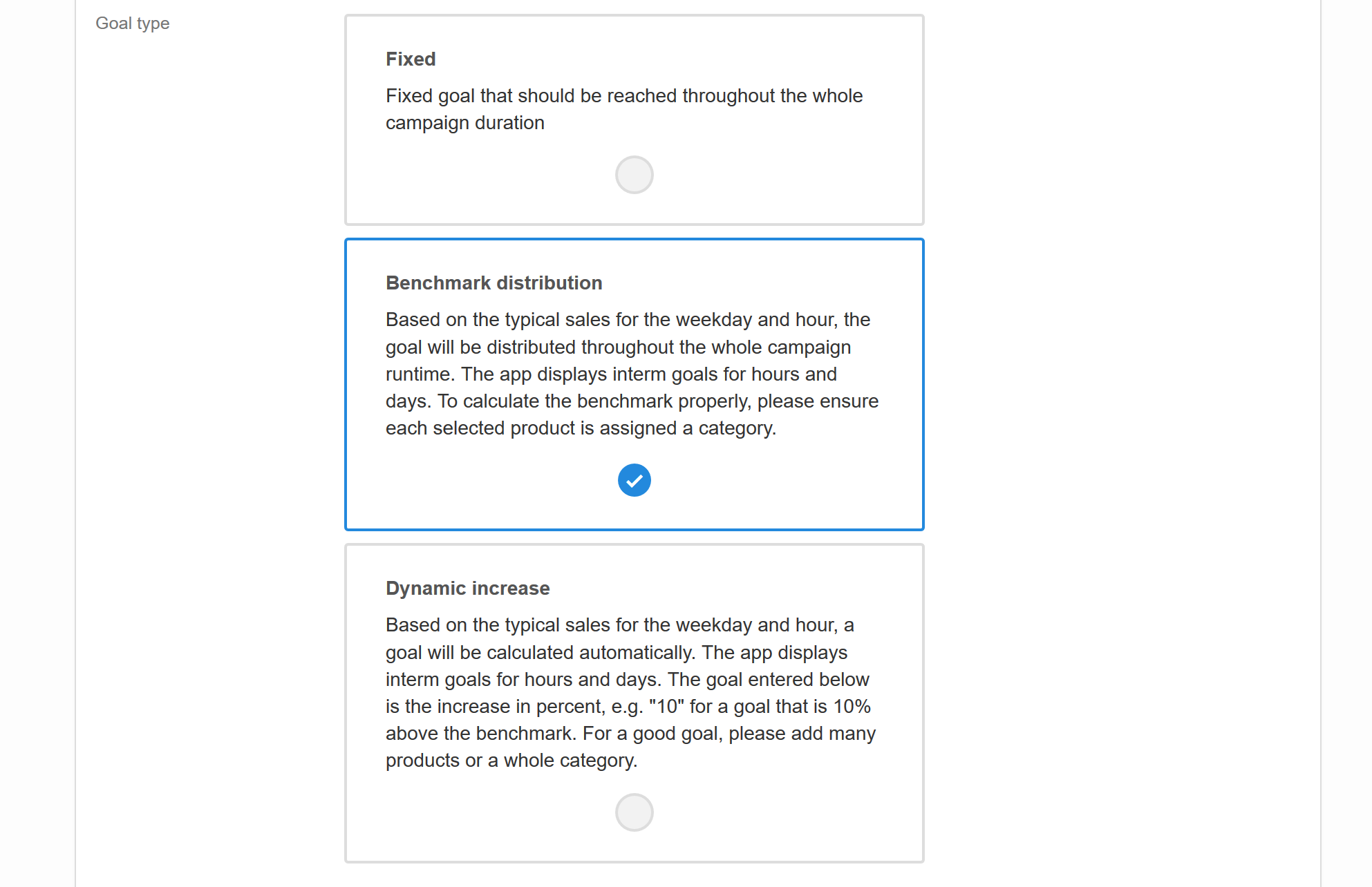 The Goal type section selects the criteria that determine the goal-value of the campaign for the employees. With Static you give a fixed target value, which must be reached by the end of the campaign period. When distributed by benchmark, the historical sales history of the product is automatically set as the target value. For this to work smoothly, each product must be assigned a category. If you choose Dynamic increase, the typical sales value is automatically calculated and subsequently increased by the target percentage. The value for the increasement has to be entered into the field for the target value. The percentage has to be stated in integer, for example write "10" for a 10% increasement.

A short example will explain the methods in more detail: Let's say you usually sell 400 units of espresso a week. If you enter 500 Espresso as a static target, your team must sell 500 espressos for the entire mission period. It does not matter if they do it on the first day all at once or over the week. In the benchmark distribution, the 500 units espresso specified in the target value are divided according to the typical sales per day and hour. For example, your staff will see a target of 30 espressos on Monday morning (9-10am), while in the evening (eg between 9pm - 10pm) only 5 espressos will be shown as targets, as they will typically sell less in this case becomes. If you now choose Dynamic Increase as the calculation method, the historical sale will be distributed over the week and day as before. On top of that, however, the target is increased by the target percentage value (e.g., 10 for 10%). So Monday morning instead of 30 units espresso, 33 are set as the target value between 9 - 10 clock.

In the last configuration point you can now determine how the goal is displayed in the sell & pick app for the employees. You can choose between bar and circle here.

Under the Products tab you can select individual products and product categories.

Here you can choose whether to choose a campaign with the goal of sales, pieces or liters. Of course you should only choose liters for drinks.

Attention: In the case of campaigns measured in liter, a volume must first be defined for the corresponding products. Find the desired article under Products, click on it and write the value of the volume (in liters) in the appropriate line (for example 0,2).

You can also choose in which store the campaign should run. It is also possible to import the campaign in several stores in parallel.

The comparative value should reflect the previous sale. It is always smaller than the target value.

The goal value specifies the campaign goal the team should work towards. It should be ambitious but realistic.

By clicking on "Start Campaign" the campaign goes live and becomes visible to the employees.

Did this answer your question?